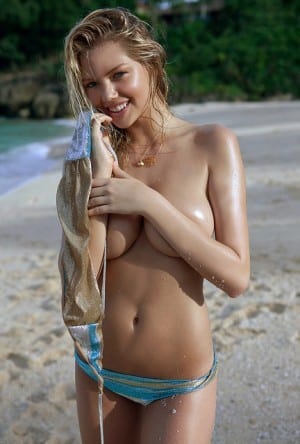 The sexy Kate Upton let out her wild side with Terry Richardson in a video posted Sunday on Richardson’s Youtube Terry TV. In the minute long video, Kate Upton is doing her version of the Cat Daddy. But, what makes the video ever-so titillating is that Upton is dancing in a tiny red bikini.

Most will remember Kate Upton from her recent appearance on the cover of this year’s Sports Illustrated Swimsuit edition.

It’s not clear why Upton decided to make the video, but no one seems to be complaining.  In the first few seconds of the video, the 19-year-old Kate Upton is just laughing, then she breaks out and starts dancing erotically from head to toe, showing offer her vivacious body. In the last bit of the video, Upton has to grab her breasts to make sure they don’t fall and tries to hit the camera.

Upton, who was born in Michigan, originally found success after uploading a video of her doing the Dougie at a Los Angeles Clippers game.

Check out the lovely Kate Upton performing the Cat Daddy below. If it doesn’t make you want to start your own Youtube Channel, nothing will.