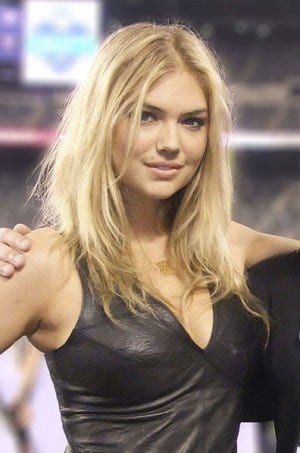 Kate Upton has landed on the cover of the coveted 2012 “Sports Illustrated” swimsuit Issue.

While most models get their start on the runways, Kate Upton launched her modeling career in an untraditional way. The 19-year-old model, born in Michigan but raised in Florida, gained a large social media following when she posted a video of herself doing the “Dougie” at a Los Angeles Clippers game less than a year ago. The “Sports Illustrated” cover was revealed during a taping of CBS’ “The Late Show with David Letterman” Monday night. However, the cover had been leaked earlier in the day online. In the photo, the lovely Kate Upton wears a tiny red and brown string bikini that shows off most of her beach-ready body.

Kate Upton has credited her awesome bikini body to living a healthy lifestyle, which includes working out regularly with a personal trainer and watching what she eats. She does admit to occasionally indulging in ice cream and fries.
Coming from the beaches of Florida, Upton seems at home in a bikini. A confidence that has clearly helped the swimsuit model succeed in the business.
At 5 feet 10 inches, Upton’s curvaceous body is a return to a more wholesome-looking supermodel. The fashion world has taken much heat in the past few years for both the young ages and unhealthy weights of its runway models. If Kate Upton’s killer figure isn’t the remedy for the problem, it’s at least making some waves both in print and on the runway.

This is her second year being featured in the swimsuit issue. Upton joins an elite group of supermodels who have graced the SI swimsuit issue in the past, such as Elle MacPherson, Brooklyn Decker, Christie Brinkley and Cheryl Tiegs.