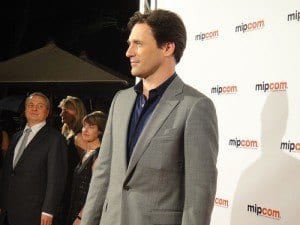 Some viewers thought it hilarious, some are boycotting the show

30 Rock live aired for the second time on Thursday night which received some of the best ratings this season. The live show went off without a hitch, as the first live episode did, except for one scene: Jon Hamm in blackface.

30 Rock live had a scene where Kenneth the page explains the history of live TV at NBC. Kenneth explained, “NBC had the first two black characters on television, sort of. For ‘Alfie and Abner,’ NBC hired one African-American and one Caucasian because they thought two black people on the same show would make the audience nervous; a rule NBC still uses today.” The camera then cuts to a black-and-white shot of Tracy Morgan, dressed in a suit and hat, walking in a door, calling for his brother. Enter Jon Hamm, dressed in dirty overalls, a dirty white shirt, an afro wig, in pseudo-blackface while speaking like a stereotype. Morgans character became increasingly fed up with Hamm’s character, that he would refuse to act. The LA Times Blog wrote, “The bit pointed out the unfortunate TV history of hiring white actors to play black characters, with Morgan’s Alfie expressing increasing disgust at his co-start’s buffoonish performance.”

Some see the 30 Rock live episode as one of it’s best, but others were so offended that they took to their Twitter to exclaim their protest of the show. Truthbesold tweeted, “I believe Tina Fey is a racist morally repugnant socially insensitive culturally incompetent bigot I’m done @30rock jon hamm #blackface.” Nodnerb B. tweeted, “Jon Hamm in blackface?! #DEAD. #30rock. I cannot.”