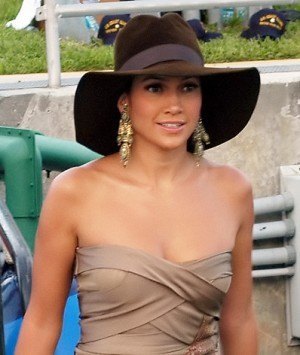 Jennifer Lopez wardrobe malfunction became a sensation on the internet last night, when viewers of the 84th annual Academy Awards thought that part of her left breast was exposed during her presentation. Ironically, Lopez’s wardrobe malfunction supposedly occurred while she and Cameron Diaz were presenting the Oscars for Best Costume Design and Best Makeup.

Jennifer Lopez’s wardrobe malfunction occurred as she was opening an envelope, and her already plunging neckline may have given Oscar viewers more then they bargained
for.

Facebook and Twitter were immediately set aflame, and DVRs nationwide rewound and users debated whether the 42-year-old superstar did in fact have a nipple slip.

The incident even caused one viewer to start a Twitter account called, JLosNipple, which had a slew of followers within a few hours.

“#J.Lo’s dress was lovely. Simple with just a hint of aureole,” “Queer Eye for the Straight Guy” fashion expert and Dancing with the Starts alum Carson Kressley tweeted.

“Is it just me, or were part of J-Lo’s nipples on display…?#jennyneedsabra #Oscars” Savannah Harden Tweeted.

Though, this isn’t the first time Jennifer Lopez had a wardrobe malfunction. Last year, her breast peeked out while at a concert in Mallorca, Spain.

If the wardrobe malfunction turns out to be indeed true, it could become more famous than Janet Jackson’s 2004 Super Bowl halftime show costume disaster.