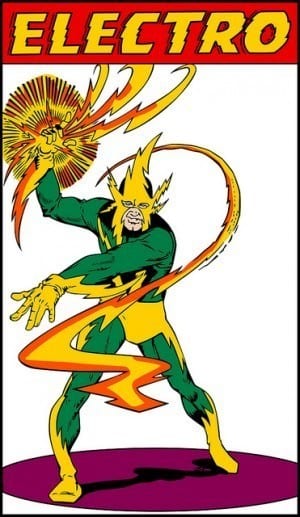 When asked if Jamie Foxx was slated to play Electro in the next Spider-Man flick, director Marc Webb only said, “He’s electrifying.” Jamie Foxx himself tweeted earlier this week that he dressed up as Electro for Halloween, and that the “costume fits well.” While neither party has confirmed that Foxx will be taking the part of Electro in the sequel, neither has done much to deny it, either, and rumors are swirling that Foxx is close to confirming his involvement in the film.

If he indeed takes the part of Electro, Jamie Foxx would join Andrew Garfield as Peter Parker and Emma Stone as Gwen Stacy in what is rapidly growing into an all-star cast for The Amazing Spider-Man 2. “He’s such a great character actor,” Webb said of Foxx in a press conference. “He’s a really brilliant guy and I would love to work with him, so you’ll be hearing more on that shortly, I’m sure.”

Electro is one of the Sinister Six and a major villain in the Spider-Man comics. In the comics, Electro is created when, while working on a power line, engineer Maxwell Dillon is struck by lightning, initiating a mutagenetic change that allows him to control electricity. Electro also makes appearances in the X-Men comics, when supervillain Magneto attempts to recruit him for the Brotherhood of Mutants, as well as in the Daredevil and Fantastic Four comic series. Electro is not usually depicted as being African American, but then again, neither is Heimdall in the Thor comics (played by Idris Elba in the film) or Perry White (played by Laurence Fishburne in Man of Steel). Foxx would actually be following a trend of comic book movies being noticeably more colorblind than their print counterparts.