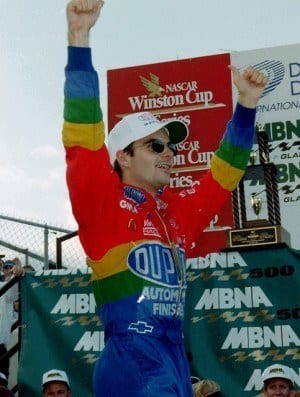 At one time or another, we’ve all wanted to see a used car salesman suffer.  He’s obnoxious, lies to us and before we realize there’s something catastrophically wrong with the car we just purchased, we’ve signed on the dotted line and it’s all too late.

The advertisement features Jeff Gordon in disguise, as a man who wants to take a 2009 Chevy Camaro for a test drive.  Little does the salesman know, Jeff Gordon is about to take him for the ride of his life.

“You are liable for damages, sir, so please stop the car,” the salesman screams as Gordon takes on gut-curdling loops around the dealer’s lot.  The video has already earned 7 million views on Youtube.

A Pepsi spokesman has told ABC News that a stunt man is responsible for some of the driving but refused to reveal whether the salesman was an actor, insisting that his reactions were 100 percent genuine.

“I started to suspect on the second viewing,” said auto enthusiast Travis Okulski of Jalopnik.com to ABC News.  Noticing rubber marks on the ground, he could tell that some portions of the ad had been shot several times.  He also knew the salesman was an actor from a source on the set.

Even if the advertisement is fake, any exposure is good exposure, according to Emma Bazilian, a writer for Adweek.  “Even if people are talking about it in a negative way, they’re still going to be talking about it.”
“I don’t know how much longer you can keep this up without people realizing they’re being tricked, but for now it’s getting a lot of hits and that’s what the brands care about,” she said to ABC News.
Be sure to check out the ad on Youtube.  Just search “Jeff Gordon Test Drive” to see the car salesman scream for his life!