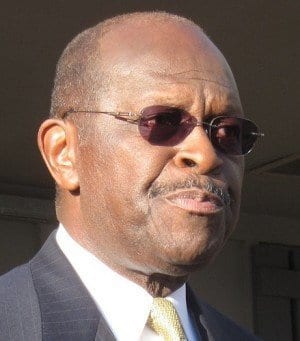 Ginger White has come forward, claiming she had a 13-year affair with presidential hopeful Herman Cain.

The Christian Science Monitor reports that according to White, she and Cain had a 13-year extramarital affair. White even showed reporters her cell phone bill which contained 61 calls/texts from Cain himself. To prove that the number was legitimate, White offered reporters the bill so that they could diall Cain’s number themselves. The reporters did and Cain answered the phone, saying he “knew Ginger White” but that her claims are “more false allegations.”

White described Cain as “Very much confident, very much sure of himself. Very arrogant in a playful sometimes way. Very, ah — Herman Cain loves Herman Cain.”

White says she came forward with her story in response to Cain’s treatment of his alleged sexual harassment victims. “It bothered me that they were being demonized, sort of, they were treated as if they were automatically lying, and the burden of proof was on them,” White said. “I felt bad for them.”

As reporter Amanda Paulson points out, however, if White’s claims are true, a consensual affair is not the same as sexual harassment. Cain also would not be the only Republican candidate to have had extramarital affairs. Newt Gingrich has had at least two extramarital affairs.