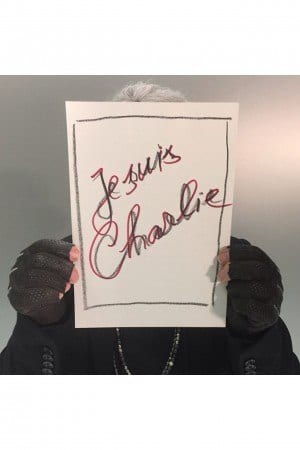 When we think “fashion”, it’s hard to imagine it without thinking of the iconic French fashion houses such as Chanel, Hermes, and Givenchy. Several legendary designers from major French houses have united under the “Je Suis Charlie” campaign to show their support on social media for the expression of free speech after the attack on the satirical French newspaper, Charlie Hebdo.

In protest of the attack on Charlie Hebdo, the “Je Suis Charlie” campaign has manifested in the form of mass protests, people carrying signs with the slogan, and the popularity of #jesuischarlie hashtags on Twitter.

Jean Paul Gaultier, who is known for using unconventional models at his exhibitions (tattoos, older men, full-figured women) as well as his playful designs when he was the creative director of Hermes (2003-2010), posted a photograph of himself and his staff standing at a staircase and holding up “Je Suis Charlie” signs on his Instagram account.

Karl Lagerfeld, who was born in Germany but works in France as the head designer of Chanel, described his sorrow for the attacks, “It’s horrible. I’ve been physically sick since Wednesday.” He posted a photo of himself holding up the sign, “Je Suis Charlie”, with his face obscured by the sign and only the white tufts of his hair poking out from the top.

Riccardo Tisci, the menswear and accessories designer of Givenchy, joined thousands who posted a famous quote from Voltaire: “I do not agree with what you have to say, but I’ll defend to the death your right to say it.”

The creative director of Dior Homme, Kris van Assche, told WWD, “Freedom of expression is a core value of our civilization and is central to any kind of creation, from comics to fashion. Beyond the horror and the shock of [Wednesday’s] dreadful news, freedom is at stake. As a citizen, as well as a creative director, I shall stand for it.”

Other members of the French fashion industry who participated in the “Je Suis Charlie” campaign to express their support for the freedom of the press include: Felipe Oliveira Baptista (the creative director of Lacoste), the staff team of Elle France, Pierre Berge (co-owner of Le Monde), and Inès de la Fressange (former bust model of Marianne, symbol of the French revolution).

Amid the campaign against silence and fear, an indirect sense of “justice of the press” has emerged: the terrorist attack and subsequent public outrage have thrown the formerly struggling satire newspaper into the spotlight.

Over the past few days, Charlie Hebdo has become an international household name and top trending phrase on Twitter, Facebook, and Google. The newspaper’s circulation has exploded from 60,000 to a million copies thanks to the coverage of the attack as well as the public’s outrage through the news and social media.