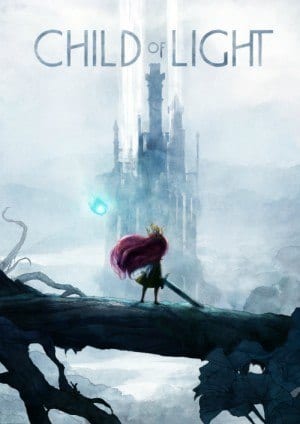 Roger Ebert said, years ago, that video games can never be art. It’s a shame he passed, because given the opportunity to play Child of Light, I think Mr. Ebert would change his mind. The first game released under the Ubi-Art framework, Child of Light takes your typical turn-based RPG and adds a beautiful watercolor motif. The game plays like a magical fairytale, complete with narrator to guide you as your party travels through the mythical Lemuria.

The story is told to players by a narrator who explains that here in the real world, Princess Aurora is on the brink of death. Instead of passing over though, she ends up in Lemuria, a land covered in darkness. The tale begins as players awaken to the strange land, only to be met with dark, drab colors. Princess Aurora stands out against the backdrop, with flowing red hair and a bright nightgown, she’s a noticeable contrast in the desperate place, a clear metaphor for the struggle of light versus dark.

To get home, she’s told, she must reunite the sun, the moon, and the stars in order to bring the light back to Lemuria. Quite fitting, you’re soon partnered with a Firefly, a shining bit of light from an ethereal plane. The Firefly, name Igniculus, is not only there as a companion, but can also be controlled with the left thumbstick or by a second player, adding co-op play to the mix. While the co-op isn’t necessarily exciting for the player using Igniculus, he is useful. Opening certain chests and collecting items on the screen that Aurora can’t reach is his basic function, but inside of combat Igniculus can heal characters for a small amount, and can slow an enemy’s turn considerably, assuming there’s enough light left in his meter, which can deplete and refill rapidly. While these mechanics are certainly something for the second player to do, it’s not as engrossing as actually playing and will grow boring for your ‘player 2’ very quickly.

Initially you’re only walking through Lemuria, and given the distance you travel throughout the game, it’s no wonder that you’re presented with a set of fairy wings early on. Not only does it serve as faster mobility, it also serves to complement the level design. Because you’re on a side-scrolling, 2D plane, including verticality opens up many more areas and allows implements, like weather to affect your movement, or environmental damage that makes your flight paths require a touch more precision as you get to later stages.

Because of the side-scrolling mechanic, enemies on the map are visible and can engage you if you’re not careful. Likewise, if you sneak up on an enemy, or use Igniculus to blind them, you can surprise the enemy and start the combat at an advantage. A meter sits at the bottom of combat to show whose turn is next and a section of the meter is reserved for your action. Some actions are instant, some are fast, and some can be very long. If you’re attacked while you’re in your action and inside that section of the meter, you’re interrupted and set about halfway back on the meter to start again.

This is the weakest part of the game.

Often you’ll find that enemies can string together a set of interrupts that can last five turns, sometimes longer, resulting in your team scrambling to stay alive. Further, when you interrupt enemies, particularly boss-types, an “interrupt counter” triggers that makes your battle that much harder. It certainly forces you to play a sort of mini-game, where you’re constantly deciding whether to attack a particular enemy or not, but if you make one bad move it can result in a “Load Game”.

In combat you’re only using two party members at a time, but they all receive and share experience whether they participated in the battle or not. There are times when, mid-combat, you’ll swap one character out for another, but it’s not as often as you’d think. Throughout the game you can get by with four or five combinations overall, and that’s from a party totaling eight (including Aurora).

As you finish, having traveled all across Lemuria, meeting friends both anthropomorphic and human, the game can best be described as a masterful mixture of titles like Dust: An Elysian Tale and Bastion, combining the world of fantasy into a beautiful display of sights and sounds, complete with a Motherly narrator who acts as if she’s telling a story to her children at bedtime.

The turn-based combat might get monotonous for a time during the 10-or-12 hour range, but the wrap-up of Child of Light is so fast-paced, that the last third of the game feels as exciting as the start. The music helps create the essence of fantasy and mingles with the art-style in a way that there’s no doubt Child of Light is one of 2014’s must-play titles.

em>Disclaimer: A copy of this game was provided for review purposes