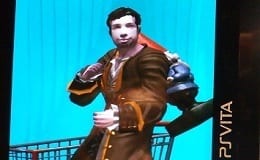 Novarama is a small indie developer based in Spain, responsible for the PSP augmented reality game “Invizimals.” Despite not leaving a gigantic footprint in the game development landscape, the company wants to redefine the fighting game genre with “Reality Fighters,” and they’re counting on the new Playstation Vita hardware to make that ambition a reality.

During our Sony booth tour at E3 2011, we took a few minutes to chat with Novarama and put our likeness right into the PS Vita launch title.

One of Novarama’s key arguments is that fighting games haven’t evolved much in the last decade. While Capcom has added accessibility to releases like “Marvel vs. Capcom 3” and the 3DS version of “Super Street Fighter IV,” the genre is still largely relegated to hardcore players who can only succeed with persistent study of the strategic nuances and mastery of the move lists. With “Reality Fighters,” the team wants to create a fighter that is approachable for new players, and just deep enough for veterans. (And let’s be honest, Sony wants to sell hardware.)

The first order of business was to create a customized character based on my likeness. We snapped a picture of my face with the Vita camera, and the speed at which it processed the image into a digital avatar was stunning. Consider, for example, how long it takes the Playstation Eye and PS3 hardware to process your mug into a digital incarnation for an EA Sports title like “Tiger Woods ’12.” In “Reality Fighters” it takes about 5 seconds.

In the next step, we picked out one of over 300 costume items. But before we settled on that illustrious Pirate coat, we tried on a dozen alternate outfits which rendered near-instantaneously onto our character. (There were also some neat touch sliders to adjust height and weight.) That’s another point in favor of the Vita, especially when considering that current-generation console games with similar customization features sometimes take several seconds to render clothing and body type changes.

When it came time to choose our fighting style, we buckled to peer pressure and chose Zombie. Thus, your friendly neighborhood Pirate Zombie College News writer was born, with over 35 moves to master. (I could have chosen from an additional 15 fighting styles, all with unique moves and animations.) With our demo time quickly expiring and an overwhelming choice of over 200 weapons, I settled on a garden gnome – and a shopping cart as my vehicular attachment (really).

So there I was, a garden-gnome-wielding Zombie Pirate avatar, rendered perfectly onto the demo table in front of me with the use of an AR marker, laying down some fluid attacks on my AI opponent. You can also strip away the AR Marker (which at this point was merely a printed item; surely it will change as the release approaches) and select one of many pre-rendered backgrounds, utilizing a full 360 degree range of movement using the Vita’s gyroscope and camera functionality. It all worked as advertised and definitely one-upped the same features present on 3DS.

It’s too early to pass judgment on the fighting mechanics themselves since this takes time and experience with each fighter and style. But the moves were fluid, solid, and fun to pull off; the unique animations for each fighting style will add to the replay value.

In terms of marketing bullet points, “Reality Fighters” should ship with training mode, story mode, and survival modes under the single player banner, and both ad hoc and local multiplayer modes. The game will also take advantage of NEAR (an online social network for the Vita) to coordinate tournaments and region-specific goodies. For example, if you live in Las Vegas, NEAR might alert you that an exclusive costume is available at Caesar’s Palace.

What we saw was an impressive demonstration of the Playstation Vita hardware, and while “Reality Fighters” may appeal to a decidedly more “casual” crowd, the Facebook integration, approachability, and – most importantly – fun factor has me looking forward to this one at the Vita launch. If only to duke it out against friends and photographed celebrities as a Zombie Pirate brawler.