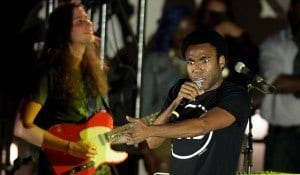 Childish Gambino is the latest rapper to make a lyrical stab at his fellow rappers.

Gambino has never been one for fighting words but this past weekend during his show in Sydney, Australia, Gambino took notes from “Control” when he delivered a blistering freestyle where he denounced Kendrick Lamar, ScHoolboy Q and of course, Drake.

Gambino pronounced himself “the best rapper ever” in his freestyle.

He rapped: “I’m the best rapper, definitely top five. If these other rappers think they’re better, they’re not fucking alive. I cut their head off, that’s every rapper living. That’s Kendrick. That’s Drake. That’s ScHoolboy. That’s everyone. I don’t give a fuck, I’ll kill n****s.”

That wasn’t all. The actor-turned-emcee took another stab at Drake when he rapped: “This n**** think he Drake. Nah I ain’t Drake. I sing better, do better, my sh*t wetter.”

Kendrick, ScHoolboy and Drake, who will be touring this summer alongside Lil Wayne starting August 8th in Buffalo have not yet responded to Gambino’s firing shots.

Check out a fan-recorded video of the freestyle here.