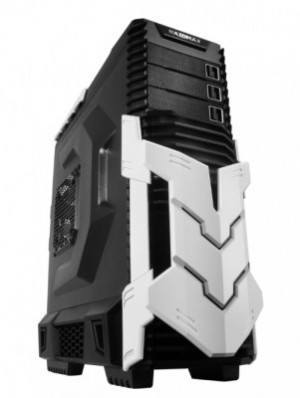 Technology has transitioned to a period where everybody needs to have a computer, regardless of its use. Entertainment, education, and simple time-wasting are only some of the benefits of owning a PC. At some point or another, you’ve browsed any number of sites looking for a PC to fulfill a certain need. Whether you need a powerhouse gaming rig, or a simple pre-built PC to meet basic study and research needs, you’ve inevitably researched how to get the biggest bang for your buck. Cost is a big factor in buying a PC, but have you ever taken a look at exactly what’s needed to build your own machine? The benefits range from experience, knowledge, and even a bit of financial relief, though less than years past.

Recently I built my own PC in an effort to refamiliarize myself with the components of a machine. I’d built PC’s in the past using an array of components, but it had been years since I took on the task. As technology gets better, the overall scope of it takes on a new shape. Smaller, faster, cheaper, and more intricate designs have emerged that allow consumers to design and build their own PC exactly to a particular set of specifications. For this project there was no particular build model; in an effort to combine power, price, and ease of creation, components were selected that best exemplified each of those tenets. This won’t explain exactly what you need to do to install every component, as there are countless guides strewn about the web. Instead, this is a guide for what to look for when trying to create your own PC, and where to add some additional power in just the right places.

Processor – AMD A8-5600K APU – $108.99 – This 3.6GHz, quad-core processor is enough power to run the software you want, but isn’t expensive and doesn’t present unnecessary implementations. The Intel core i7 is popular right now, but with hyperthreading going unused by every game on the market, shelling out for the extra power that would only really get used for video editing wasn’t cost-effective. Instead, the AMD option is affordable and allows for a reasonably priced motherboard. Additionally, this APU combines the CPU and GPU, meaning if you’re not doing any gaming, you could probably get away without the video card discussed later.

Motherboard – ASROCK (FM2A75 Pro4 FM2 AMD A75 ATX AMD Motherboard) – $64.99 – The main reason for this selection is price, but surprisingly the features delivered make this a perfect choice for the build we have. With up to 32GB dual channel supported memory, two USB 2.0 and six USB 3.0, HDMI and optical ports, ASROCK provides plenty of options and allows room for expansion as technology progresses.

RAM – Kingston HyperX blu: red – 16GB (2x8GB) – $119.38 – With so many choices for memory, getting a high power, brand name product at a reasonable cost is difficult. Kingston provides a magnificent option with the HyperX blu line, but delivers it at a cost that won’t empty your wallet. Options include single sticks up to 8GB and kits ranging from 4GB to 16GB. The latter might seem like overkill for the machine we’re building and, frankly, for most machines right now. Inserting 16GB allows for the user to disregard upgrading RAM as other components are improved, at least for a little while.

Power Supply – Rosewill Capstone 750w – $114.99 – You won’t need 750w of power from the start, but it’s always a good idea to have too much rather than too little. With the amount of USB ports and the storage we’re using with this build (more on that shortly), ensuring you have proper power being delivered is key. Too little and you may end up with hardware that doesn’t act as expected, or worse, gets damaged.

Video card – NVIDIA Geforce GTX 660 Ti – $269.99-$289.99 – The GeForce GTX 660 Ti was selected primarily for its use in gaming. NVIDIA’s PhysX act similarly to EA’s Frostbite engine, allowing true-to-life physics for destructible environments. Working wonderfully in games like Borderlands 2 and the upcoming Metro: Last Light, gamers are given an experience unmatched. Additionally, this card supports up to four simultaneous monitors. Granted, most of use will never use four monitors at once, but having the option is nice.

Storage has evolved from a luxury to a requirement. We, as consumers, have moved into a digital age, consuming our movies, television, and music from download or streaming services that weren’t available even five years ago. Because of that simple fact, as we build we need to make sacrifices on what is deemed necessity versus what is simply “nice to have”. Optical drives have moved into that category; without the constant need to “insert disk” for installation, specifically with Netflix for movies and Steam for PC gaming, the optical drive has become nearly obsolete. If you have a need for an optical drive, external options are available. With the motherboard and power supply already primed for multiple external hardware options, you’re more than able to use one. For this build though, no optical drive is selected.

SSD – Kingston HyperX 120gb – $117.99 – Solid-state drives are expensive, considering the storage, but used as a boot disk or to play your most-used games, SSD offers unrivaled speed. Hard-booting in less than 30 seconds, Kingston’s HyperX SSD allows users to begin whatever project they need with little delay. Transfer rates up to 6GB/s and more reliability over basic storage is also a plus, but the speed is what makes the SSD as touted as it is.

HDD 1 – Western Digital Velociraptor 1TB – $229.99 – High-performance storage is the theme here, and the Velociraptor delivers. It’s got a 64MB cache, high capacity, and one of the highest reliability ratings for a high-capacity SATA drive, meaning the risk of data loss is minimal. The 1TB capacity is also great for making this your primary drive for applications and lesser-used games.

HDD 2 – Seagate Barracuda 3TB – $132.58 – As stated, the purpose of this machine is to consume all entertainment digitally. Obviously movies, music and games take up a lot of space. Seagate delivers 3TB of storage with their Barracuda model and does so with high-density read/write through their Acutrac technology. Additionally, Seagate’s free software allows Windows to recognize drives beyond 2TB, giving you a drive that will hold massive amounts of information, read it quickly, and deliver it to you in some of the fastest ways possible.

Keyboard – SteelSeries Merc Stealth – $89.99 – GAMING! That’s the only reason you’d purchase this keyboard, but it’s a damned good reason. Red, blue, or red background illumination, rubberized keys, and pre-made controls for over 150 games means this is ideal for whatever title you’re currently playing. With the custom engineered “gaming terrain” on the left of the keyboard, all of the commands you need are easily accessible, specifically when playing MMO’s.

Mouse – Mad Catz MMO7 White – $129.99 – You’ve already read about all the features this mouse offers, so despite the cost, this is best option for those spending their time in a fantasy world. Weighted perfectly and designed to fit your hand comfortably, the MMO7 customization compliments the keyboard to allow for an unrivaled experience. The “White” option of the mouse also compliments the case, presenting a clean motif.

Monitor – Samsung 27 Class LED – $549.99 – When it comes to viewing your digital content, obviously you want the best experience possible. For monitors, nothing beats the Samsung 27 Class LED monitor, though you will certainly pay for that experience. With Wi-Fi, hundreds of apps, and a large, hi-res 27” picture, you will not find a better monitor. If you’re looking for something smaller or, perhaps something more affordable, there are certainly other options. Monitors with smaller screens and less features are available, but you will be sacrificing your overall experience.

Case – Raidmax Agusta – $109.99 – With a look like Megatron from the Transformers series, RAIDMAX delivers far more than just a pretty package. Accessing the insides of the system is made far easier when all HDD’s are located at the bottom, resting in hot-swap channels. With five fans working to move air through the case, each of them adjustable in both speed and amount of light emitted, the airflow is wonderful and the dust inside is kept to a minimum. Though a bit bulky, the overall look more than makes this a must-have PC case.

OS – Windows 7 Home Premium- $95.05 – Although Windows 8 is the latest operating system to release, its functionality suffers for those users who don’t own a touch screen monitor. We’ve grown accustomed to Windows looking and operating in a certain way, and until Microsoft delivers a better user experience, it’s hard to promote Windows 8. Therefore, Windows 7 Home Premium is the answer, delivering a useful interface at an affordable price. Due to the age of Windows 7, the cost of the OS is significantly less than it was years ago, making it the ideal choice to round out your self-made PC experience.

When purchasing pre-made, comparable systems using the components described above would cost you from $2,400.00 to $2,700.00, depending on manufacturer and other concessions you may make during hardware selection. Beyond saving a little scratch, the experience of building your own PC, along with bragging rights of course, will be the highlight of the entire ordeal. Saving a few hundred dollars is nice, but there are far better ways to build a gaming PC on a budget — this experience will require particular patience, but in the end you’ll end up with hardware primed for digital entertainment, whether that’s movie, television, music or gaming. Keeping in mind that the monitor itself is nearly 25% of the total cost, there are other ways to save a dollar here or there, but it may affect your end-user experience.

Disclaimer: With the exception of the motherboard, each item was provided by the manufacturer for the purposes of this article. All prices listed from Amazon.com as of April 23, 2013.