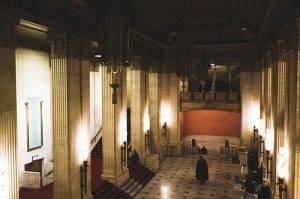 On February 22, Lyric Opera of Chicago will be transformed into a majestic fairytale when Antonín Dvořák’s Rusalka premieres for an enchanting run at the famously stunning Midwestern opera house.  Written and performed in Czech, Rusalka follows the mythical story of a water nymph named Rusalka who has fallen in love with a human and desperately wants to be a mortal so she can be with him. A witch then grants her wish, but tells her that if the prince is dishonest or unfaithful to her, then she is doomed forever.

This tragic tale of love was first performed in 1901 and has since become the most famous Czech opera.  Rusalka’s plot was mostly adapted from the classic story “The Little Mermaid”, which was written by Hans Christian Andersen in 1837.  Rusalka is now noted as an iconic piece, with its most famous aria “Song to the Moon” being credited as a classic piece of music.

Lyric Opera of Chicago will surely birth a stunning production of Rusalka, having enlisted the best musicians in the business to be a part of this amazing performance. Sir David McVicar, who has many other amazing operas from Lyric in his repertoire, including Julius Cesar, Elektra and Manon, will direct this production of Rusalka.

Puerto-Rican opera singer Ana Maria Martinez, who was in a previous production of Rusalka the Glyndebourne festival in 2009, will play Rusalka.  Brandon Jovanovich, who has a slew of operas under his built, including works from Wagner, Puccini and Britten, will play the prince.  Mezzo-soprano Jill Grove will be belting out her voice as Jezibaba, the witch. Eric Owens, who will be playing Wotan, in Lyrics upcoming production of Wagner’s ring-cycle, is set to play Vodnik. The cast is then rounded off with the talented Russian singer, Ekaterina Gubanova who will be playing the Foreign Princess.

Ana Maria Martinez and Eric Owens will also making appearances at Chicago area schools during the full run of Rusalka as Community Ambassadors through the Lyric Unlimited program. This program is a part of an initiative to reach out to different programs such as the Youth Opera Council and the Teen Opera Circle, so more youth can be exposed to this breathtaking art form.

Lyric Opera of Chicago’s Rusalka will be performed over a total of three acts and has a runtime of 3 hours and 39 minutes. The production opens on February 22 and runs through March 16. Find out more information and buy tickets HERE. College students can receive discounted tickets as low as 20$ as a part of Lyric’s NExT program. Find out how more about that HERE.

Previous ArticleMoogfest 2014 adds MIA and Pet Shop Boys to their lineupNext ArticleIt’s Not About Getting A Job, It’s About Finding a Vocation!