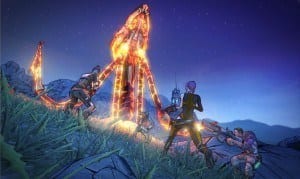 A bazillion guns … and one bad guy

Borderlands 2 brags about including ‘a bazillion guns’ which is obviously intended to act as hyperbole. The funny thing about the exaggeration is that it’s not far from reality. With the sequel to the surprise hit of 2009, developer Gearbox took the criticism of fans and reviewers alike to heart in order to create a game that keeps the framework that made it popular, while changing the things players disliked. The result is a game that looks magnificent, while appealing to fans of first-person shooters (FPS) and role-playing games (RPG), two genres that rarely meet.

As expected in any RPG, players will have the luxury of choosing their class based on their favorite play style. Characters each have their favored role which ranges from the in-your-face, bullet spraying offensive classes, to support roles, or even a stealth-type character that relies on misdirection for each scenario. These classes are the same that appeared in the first game, but with remodeled skill trees — that is, abilities unique to each particular character — the feel is both recognizable and new at the same time.

As characters level up and unlock new skills, the game compensates by throwing enemies that are more difficult, plentiful, and varying at the players. The weapons you can use, just a few of the bazillion claimed to be in the game, all have varying statistics. Damage, rate of fire, reload, and elemental damage are just some of the components that players will need to be cognizant of because key differences can change the outcome and ease of battle. For instance, creatures without armor are susceptible to fire, while robots fear corrosive damage. This creates a unique system of knowing your enemies weaknesses while also keeping track of what weapons you have available.

Speaking of unique systems, Borderlands 2 offers players multiple systems to master within the game, some layered upon others.  Surprisingly, Gearbox does so without causing a dysfunctional, gangly mess. Currency is gained by selling items or finding cash littered around the landscape, but the rare Iridium Bars that you find are far more valuable, used to increase inventory or bank space, or increase maximum ammunition for a particular weapon type. As previously mentioned, each character can level up and unlock new skills to create a unique, customized killing machine. In addition to your basic leveling, a new ‘Badass Rank’ system has been introduced. By completing challenges, both fun and insane, players will unlock tokens that can be used to alter game mechanics across all characters. Reduced gun recoil, increased fire rate, and more weapon damage are just a touch of what is available to players, essentially giving players that dedicate time to the game an upper hand for each successive playthrough.

The planet of Pandora itself acts almost as if it’s a character in the game. Starting in an icy tundra (instead of the dusty wasteland of the first game), players immediately begin to understand that different areas of the planet create different environments and in turn, different enemies. The constant changing scenery of caves, wastelands, towns, and cities, consistently lend players new visual markers and create separate feelings towards each individual environment.

While the gameplay itself is certainly something to behold, without a confident, engrossing story the game can fall into the category of ‘loot hunt’. Thankfully, Borderlands 2 features a deep story that will intrigue players regardless of their solo or co-op play styles. After players had opened the Vault in the first game, the head of the Hyperion Corporation (known as Handsome Jack) decides to institute a hostile-takeover of sorts for the entire planet in an effort to secure the aforementioned Iridium that is now available on the planet, another event triggered by the opening of the vault at the end of the first game. Handsome Jack is reminiscent of animated anti-hero Sterling Archer, rattling off humorous quips and one-liners throughout the course of the game.

And while ridding Pandora of Handsome Jack is clearly the plothook, the voice acting and writing of other NPC’s, even the throwaway unnamed thugs, carries a level of objectivity which gives way to increasingly humorous situations. Imagine a 13 year-old girl asking you to retrieve guests for her tea party, while dropping some of the most abusive imagery and disgusting curse words you’ve ever heard. Yeah — it’s in there. Or a woman the size of a small trailer discussing how her redneck brother wanted to … ‘know her better’. That’s there, too. It’s that level of humor, taking stereotypes to exaggerated instances or at time even flipping them around as a sort of ‘shock humor’ that will put even the tamest of players into fits of laughter.

Magically, it all comes together as each piece fits into one another, forming a game that exceeds all expectations. Returning players will find that the changes they clamored for have been implemented, while newcomers will discover a unique mash-up of genres that truly gives something to everybody. Even when playing solo, the implementation of NPC interaction will make players feel as if they’re never alone on the world of Pandora. It may be nearly impossible to confirm whether Borderlands 2 really has a bazillion weapons, but it’ll sure be fun as hell to try.