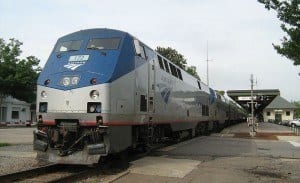 “It is an absolute disastrous mess,” is how Philadelphia mayor Michael Nutter is describing the incident. As many as six people are dead after an Amtrak derailment near Philadelphia on Tuesday. Six or more remain in critical condition as well, and as many as 140 people are being treated at local hospitals. Federal investigators were on scene to determine what caused the accident. Amtrak and city authorities estimated that there were 238 passengers and five Amtrak employees on Train 188, which was traveling from Washington, D.C., to New York City, when it apparently went off the rails at around 9:30 p.m. As the train neared a curve in the Port Richmond area, it suddenly slowed, and according to one witness, “The train started to decelerate, like someone had slammed the brake,” and that “suddenly you could see everything starting to shake. You could see people’s stuff flying over me.”

That witness, Paul Cheung, then escaped out the back of his car, when another passenger urged him to do so. He describes seeing other passenger trying to escape from the windows of the smashed and tangled cars. Cheung said that, “The front of the train is really mangled,” and “It’s a complete wreck. The whole thing is like a pile of metal.” According to the Federal Railroad Administration, one car was flipped nearly onto its roof, another was close to toppled, and three were on their sides, while the engine and two of its cars stayed upright.

Officials are saying that more than 120 firefighters and 200 police responded to the chaotic scene. Mayor Nutter said that rescue workers had to use hydraulic tools to help some of the trapped passengers escape from the wreckage. Radio calls from the derailment scene have been released. The chilling audio captured the moments that first responders arrived on scene, and assessed the immediate situation. The cause of the crash is not known, and Amtrak officials have declined to speculate on the circumstances until further investigation. The last time that an accident of this scale happened along the Northeastern Corridor was in 1987, when a Conrail train ignored signals and ran head-on into an Amtrak train. Sixteen died in the incident, which provoked safety concerns for the transit system.