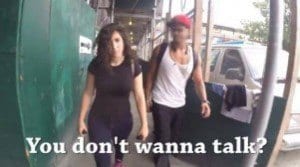 How to be a Gentlemen

Today I was sent a link to a video about a woman walking around in New York City who was getting harassed by men.  This was the premise of the video that even ABC News has even decided to make a sensationalized story on.  Now, I’m not saying that harassment of women doesn’t happen; I’m not a damn idiot!  What I am saying is that some of the claims are getting ridiculous and the fact that ABC News took zero journalistic responsibility by running this video as a newsworthy social study takes as much balls as Bush going after Iraq on claims of weapons of mass destruction (that were never found).

To Debunk or Not to Debunk?

This is not a study on human behavior.  There are not any variables, no percentages and the only hypothesis that is there is the fact that an attractive woman WILL get noticed on the street and men WILL try to talk to them, even if their game is as weak as the Chicago Bears; which by definition is NOT a hypothesis.  That is a person who knows what results they are going to recieve from the get go.  It is just like on social media, if a pretty girl is out there be sure that said pretty girl will be getting “likes.”

The video does claim at the end that,

“100+ instances of verbal street harassment took place within 10 hours, involving people of all backgrounds.  This doesn’t include the countless winks, whistles, etc.”

Then after that claim, Hollaback asks for donations to more than likely fund seminars and perpetuate the idea that street harassment is some dangerous epidemic like HIV or Ebola (only an epidemic in West Africa) with no actual evidence that these seminars could produce any kind of results.

“non-contact unwanted sexual experiences, including street harassment, are the most prevalent form of sexual violence for both men and women in the United States.”

This only leads me to believe that they don’t really know what the definition of “violence” is.  Can the word be used in a non-contact situation; yes, if you are looking to sensationalize a situation and scare people into believing a certain way.  Using the idea of violence still has to somehow be harmful to the person that the act of violence is being acted on.  The only points of violence that I saw were the 2 men who decided to follow her for several minutes and even those two were more dangerous than violent. The one man had no idea how to talk to a woman.  The other guy walked next to her silent like the Son of Sam; thank The Great Lama Prince (if I say God, Allah, Buddha, or any other I might offend a WHOLE NEW group of people) for cameras!  That’s 2 out of 100+ that were claimed!  I say that because if there were more bad ones in that 100+ they would have shown it in the video.  Don’t say that it was because it would be too long of a video!  It only took 2 minutes to show 20+ men; the 100+ would have only been a 5 minute video.

What Can We Really Do About This?

First off, men really have to curb the idea that women are their personal Chocolate Factory.  You can talk to a woman without objectifying her in every single way possible.  So, here are ways that men can talk to women without fear of being some crazy sexist pignut who is just looking for a good time.

1.       Look up the word “objectify.” I hear a lot of guys scoff at the word, but I’m pretty sure that most guys haven’t a fucking clue as to what it means to objectify a person.

2.You need to listen to women.  Now, this can be used on all different levels of a relationship.  For instance, when you first meet a girl.  If you make an advance on a girl and you hear her say nothing, DON’T FOLLOW HER!  When a woman is not showing any interest in your come-ons, don’t push.  You can also listen to body language!  If a girl is walking down the street with a piss-face (like in the video) you probably don’t want to catcall her.  When you are in a public place with a girl that you are trying to talk to and she is looking around at other people; save yourself the embarrassment and just thank her for her time and walk the Hell out of there with some dignity.  Your ego might be bruised, but at least she isn’t telling the whole place about what kind of tool bag you are.

3.Look her in the eyes.  Women are not going to go home with you if you are a little perverted sexual parasite with no self-control.  This comes back to the idea of “objectifying.” If you can’t control your eyes, you are telling a woman that you have no control in any other aspect of your life; including the bedroom.

4.If a girl likes you, she will let you know.  There is no more true statement than this.  Women will let you know if they are into you.  Sometimes they will figure out ways to touch you, they will laugh at your jokes even if they aren’t funny (you know you aren’t that funny) and most important, they will actually be talking to you.

5.Don’t catcall!  I know that it seems like I’m reiterating myself, but follow me on this.  Any girl who will actually respond to some swine like holler is probably NOT a girl that you want to bring back home.  She very well could be a slut, she will probably go home with you plus tons of other guys/girls/dogs and your penis will turn purple and fall the fuck off.

Jokes aside guys, just simply act like a gentlemen.  You don’t have to be a pansy, just don’t be an ill-breeding lout.  Women love confidence; they don’t like arrogance.  Women love an assertive man, not a selfish child.  Be good to women and they will be good to you.